It’s that time of year when daycare closes for the summer and we party with a year-end celebration!  This year’s theme was Scooby Doo, one of the kids’ all-time favorite cartoon characters.  I was a bit surprised that the cowardly dog, who would rather have a snack than solve a mystery, would remain so wildly popular after 41 years!  When the kids began to memorize the lyrics of the theme song, back in October, I knew we had the makings of a great party.

I shopped around for a Wilton Scooby Doo cake pan (after last year’s Rock Star Guitar Cake, I wanted to do it again!) and found this one on Ebay:

I used the Pillsbury Funfetti cake mix and followed the recipe for Wilton’s Buttercream icing, which was perfect for piping stars.  (I know his fur is dark and he looks a little bit like Yogi Bear, but I was not about to make another batch of frosting!)

In keeping with the theme, I labeled some dog bowls with the kids’ names and we used them at lunchtime to eat (you got it!) hot dogs!

NO party is complete without a pinata filled with lots of goodies, and I just love the looks on their faces when all that candy comes pouring out at their feet! 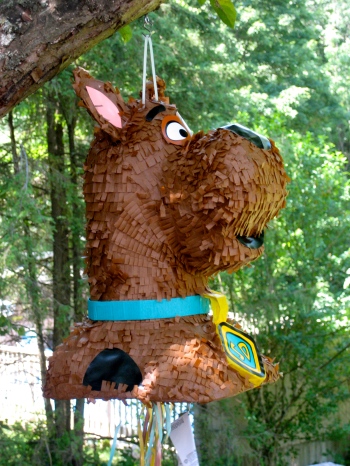 It was a happy day and a successful party, for sure.  I didn’t bother to share with the kids the fact that, a long time ago, Scooby Doo was a part of my Saturday morning lineup.  And when I began to think of just how long ago it actually was, I had myself a Scooby snack, jumped into my Mystery Machine and headed to Marshalls (ruh,roh), where depressing thoughts vanish in the shoe department.

We're Ann and Alyssa, a mother and a daughter who love to make all sorts of things in our kitchens and craft rooms. Whether you're looking for a recipe, a recommendation for a knitting pattern, or just inspiration to make something of your own, we hope you enjoy your visit.

Tell us what you're making today, or just say hello.